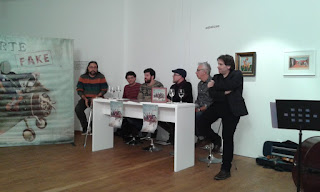 Presentation of the book-disc Talabarte Fake at Fundación Granell (Compostela) on the 18th of November. Thank you to Douglas Naismith, who translated the texts of the book from Galician into English, for this video and photos 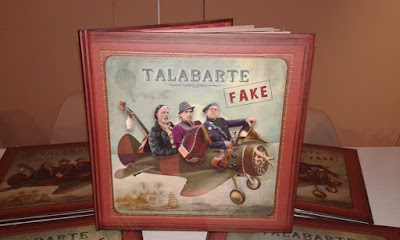 
The Solitude of the Monster 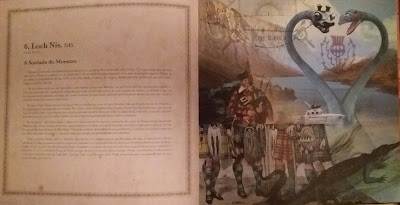 "Monster seems like an exaggerated denomination for such a pacific and adorable being as Nessie. Sure neither is it very clear who Nessie really is: a prehistoric being? A disproportionate crocodile? Or simply some sort of gigantic lamprey? We only know that it has lived in the depths of Loch Ness, in Scotland, since the beginnings of time, in pacific existence in which no known human attack has been recorded. Its sightings are as sporadic as timid, distant photographs that hardly allow a guess of a head in the shape of a periscope that sticks out to check if everything was in order, or not; the tip of an iceberg, in short, of a being of colossal dimensions that in spite of not wanting to be the centre of attention, has generously fed the tourist industry of Inverness-shire for more than a century.

There are those who say that Nessie will finally surface one day and settle on land, on free land, the day that Scotland decides in a referendum to her independence from the oppressive British yoke. But as myths exist for all tastes, there are those that also say the Loch Ness Monster doesn’t exist, and that the famous photo taken by the surgeon R.K.Wilson in 1934 in the Daily Mail, was a lie, barely one of the pioneering episodes of the sensationalist British press in its frenzied competition to sell papers.

Recently, some divers confirmed, to the surprise of the world, the existence of the remains of Nessie in the depths of the loch. It wasn’t the original monster, but more like its double, an enormous mechanical creature created for the film “The private life of Sherlock Holmes” by Billy Wilder that, victim of the excessive ambition of the producers, couldn’t keep hold of its two iron humps and ended up sinking forever to the depths of Loch Ness.

For the authentic Nessie, it must be fun to observe on its solitary swims through the cold waters of the loch, the ruin of its ridiculous ironwork parody: or to stick its head out of the surface to find out if its beloved Scotland is finally independent or not from the United Kingdom.

What’s not so much fun for Nessie, however, is the solitude of someone who doesn’t have a companion with whom to share their existence. And this is the true drama of Nessie because monsters have hearts too and Nessie, in particular, is all heart and is very lonely in the cold waters of Loch Ness. And because everyone wants to see Nessie, but never to ask her how she is, how she’s feeling, what she needs …"