This week’s Alex Salmond Show kicks off a three part series on Gibraltar, as the territory comes to terms with Brexit. Gibraltar voted 96 per cent to remain in the European Union but Alex found Gibraltarians surprisingly optimistic about the economic prospects for The Rock. He interviews key commentators including former Trade and Industry Minister Peter Montegriffo QC, leader of the Gibraltar Remain campaign Gemma Vasquez and Mike Nicholls, head of the largest property company in the territory.
The Alex Salmond Show broadcasts every Thursday on RT International at 07:30, 18:30 and 23:30(GMT) on SKY 511 and FREEVIEW 113.
Publicado por pilaraymara.com en 11:52 Ningún comentario: 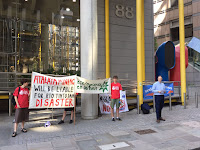 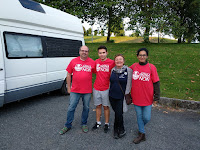 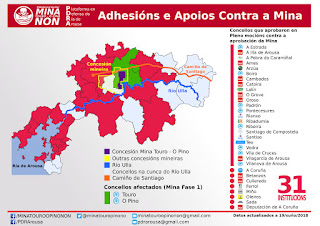 It is not only that there is no #sociallicense for the Touro copper mine, what we have here is a HUGE OPPOSITION to this project. It will not go ahead because we, the neighbours, will not allow it. Not now, not in the future. Never. Atalaya you are not welcome #minatouroopinonon https://t.co/enU19oKJ2T
— Touro Galicia NWSpain (@NwspainTouro) 27 de junio de 2018

Elena from @ecologistas and Luis from @minatouropinono are inside the Atalaya Mining AGM in London to hold the company to account for its tailings dams in Andalucia and Touro copper mining project in Galicia - Atalaya has faced massive protests and communtiy opposition #NoALaMina pic.twitter.com/0HS92ZQmIJ
— The Gaia Foundation (@GaiaFoundation) 27 de junio de 2018 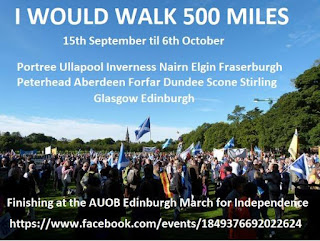 I interviewed Dave Lewellyn, organiser of the "I Would Walk 500 miles" march. I find this iniciative very interesting and I can confirm that I'll be participating in (a wee leg of the way

;) ) and reporting on this event and the #AUOB event in Edinburgh on the 6th of October 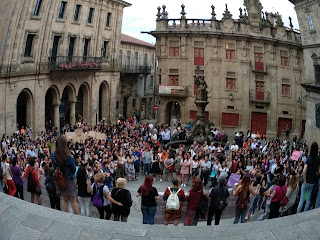 This week’s Alex Salmond Show examines the state of Brexit against the backdrop of high political drama at Westminster. Alex interviews former Downing Street spin doctor Alastair Campbell, MPs Tommy Sheppard, Hywel Williams and Sammy Wilson, as well as pro-Brexit commentator Peter Oborne to find out whether the Brexit bus is still on the road.
The Alex Salmond Show broadcasts every Thursday on RT International at 07:30, 18:30 and 23:30(GMT) on SKY 511 and FREEVIEW 113.
Publicado por pilaraymara.com en 12:26 Ningún comentario: 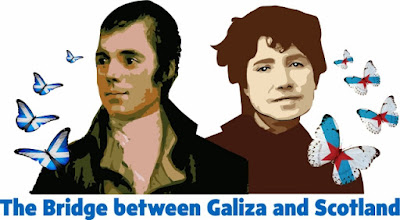 Thank you so much to Brave - DefiAye - Twitter @defiaye for this fantastic logo. I'm so happy! And there are more surprises on the way... stay tuned!

The Alex Salmond Show - Episode 31 - #Ramadan & the festival of #Eid

A special feature on Ramadan⁠ and the Festival of Eid, including a discussion on Islamophobia with Lord Sheikh, and interviews with Lord Nazir Ahmed, Baroness Uddin, and Islamic Relief.
The Alex Salmond Show broadcasts every Thursday on RT International at 07:30, 18:30 and 23:30(GMT) on SKY 511 and FREEVIEW 113.
Publicado por pilaraymara.com en 21:17 Ningún comentario: 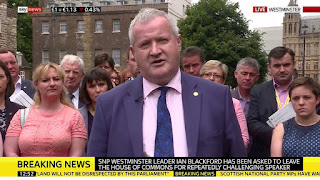 "We haven't wrecked #PMQs , it's the government that's wrecking the powers of the Scottish parliament" - @IanBlackfordMP was asked to leave the House of Commons for repeatedly challenging the speaker https://t.co/9t1aC8gTqa pic.twitter.com/eLuSVP7PiK
— Sky News (@SkyNews) 13 de junio de 2018

"We haven't wrecked #PMQs , it's the government that's wrecking the powers of the Scottish parliament" - @IanBlackfordMP was asked to leave the House of Commons for repeatedly challenging the speaker https://t.co/9t1aC8gTqa pic.twitter.com/eLuSVP7PiK
— Sky News (@SkyNews) 13 de junio de 2018

"What we saw last night is the government ramming through legislation that takes responsibility of 24 areas back from the Scottish Parliament but remarkably without debate. Not one single Scottish MP was able to speak in that debate" @IanBlackfordMP tells @Jo_Coburn#bbcdp #pmqs pic.twitter.com/XADvJ7YHAE
— BBC Daily Politics and Sunday Politics (@daily_politics) 13 de junio de 2018

"The Speaker might have been minded to give you the debate you wanted.... you won't be able to vote on the rest of the important part of #EUWithdrawalBill #bbcdp #pmqs pic.twitter.com/wkG5tLRoZu
— BBC Daily Politics and Sunday Politics (@daily_politics) 13 de junio de 2018

Quen defende a Escocia? (E a Gales? E a Irlanda do Norte?) // Who is standing up for Scotland? (and for Wales? and for N. Ireland?) #Brexitshambles #Scotland #Devolution #EUWithdrawalBill #Brexit 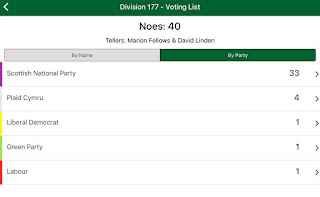 House of Commons votes 321 to 40 to agree with the remainder of amendments in the second group made by the @UKHouseofLords to the #EUWithdrawalBill.
These amendments relate to devolution.
— UK House of Commons (@HouseofCommons) 12 de junio de 2018

The Tories couldn’t have made it any clearer today that they have no respect for @ScotParl. Never again will the line that Scotland is an equal partner in Westminster system be believed. The decision to act without our consent, and the manner of doing it, will not be forgotten.
— Nicola Sturgeon (@NicolaSturgeon) 12 de junio de 2018

And this is today's summary:
The Union is over.   #EUWithdrawalBill #BrexitShambles  #Devolution pic.twitter.com/JRY5wWVdd7
— Pilar Fernandez (@pilaraymara) 12 de junio de 2018

I campaigned for a Scottish https://t.co/rV0viGuWBw the House of Commons has overturned that devolution settlement taking back the Parliament’s devolved powers. As a former Presiding Officer of the ScotmParl who was elected to protect the powers of the Parliament I am appalled.
— Tricia Marwick (@TriciaMarwick) 12 de junio de 2018

Commenting to the Speaker on today's debate travesty at Westminster regards devolution & #BrexitBill , @HannahB4LiviMP  points out: "The public looking on not just in Scotland & across the UK but across the world will be looking at our procedures & laughing".
— WomenForIndependence (@WomenForIndy) 12 de junio de 2018


All of the 3 Scottish and UK party leaders have signed a declaration guaranteeing more power for Scotland #bbcindyref pic.twitter.com/uh64pWihCc
— Better Together (@UK_Together) 14 de septiembre de 2014


.@IanBlackfordMP tells #BBCGMS that the lack of time given to Scottish MPs to debate the #Brexit bill was a "democratic outrage" https://t.co/5SNbkrxZLb pic.twitter.com/ACX6TWkyx8
— BBC Scotland News (@BBCScotlandNews) 13 de junio de 2018 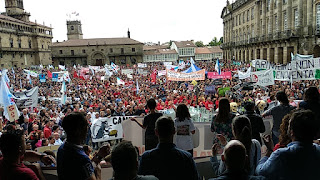 On the 10th of June a demonstration took place in Compostela. People from the land and the sea joined their voices to say loud and clear NO TO THE MINE. Now the Galician Government must listen to and stop this macro project that is going to be devastating no just for the area but for the whole of Galicia. 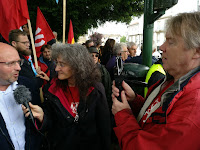 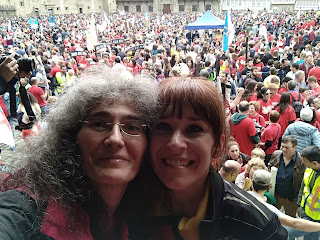 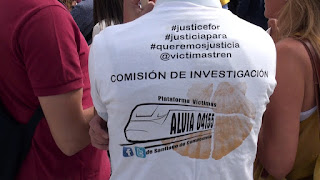 In this, the last of our three-part series on shipbuilding, The Alex Salmond Show visits Ferguson Marine on the Lower Clyde - a shipyard set for closure only four years ago, which is now rising like a phoenix from the ashes.
The Alex Salmond Show broadcasts every Thursday on RT International at 07:30, 18:30 and 23:30(GMT) on SKY 511 and FREEVIEW 113.
Publicado por pilaraymara.com en 13:46 Ningún comentario:

All Under One Banner - Interview with Gary J. Kelly about the next rallies #Scotland #Indyref2 #AUOB

All Under One Banner celebrated another successful event in Dumfries. More than 10.000 people attended this event.
I spoke with one of the organizers: Gary J. Kelly
Now they are organizing more rallies across Scotland: Bannockburn will be next followed by Inverness, Dundee and Edinburgh... Are you going to take part?
Publicado por pilaraymara.com en 22:01 Ningún comentario:

This week, The Full Scottish is on the road again, to bring coverage of the All Under One Banner march in Dumfries and the usual top quality in depth discussion, from Maggie Gordon's Barfil farm in Crocketford in the heart of Dumfries and Galloway. Our guests on the programme are Amanda Burgauer, Chair of Scottish Rural Action, Calum Kerr, Former SNP MP, Richard Arkless, lawyer and former SNP MP and Maggie Gordon. 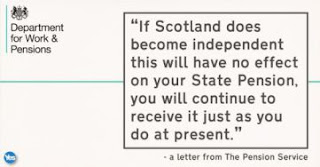 Welcome to the excellent audios by Michael Greenwell - Enjoy and please, consider donating to his platform

The 166th episode of The Scottish Independence Podcast features, amongst other things, an interview with Peter Swain of Pensioners for Independence (courtesy of Independence Live).

You'll also find out why I was very tempted to call the episode "Archie, Archie, What's the Score?", even if part of that joke will only make sense if you were born before 1985.


I also had to include Boris Johnson, or as he is known in Scotland, Bawjawz, trying to justify some of the worst Tory behaviour. As he does so, he is kind enough to show just how far removed from you and the rest of reality in the process.

Finally, there's a semi-unrelated part relating to how the BBC will shut down certain discussions if you go off script. 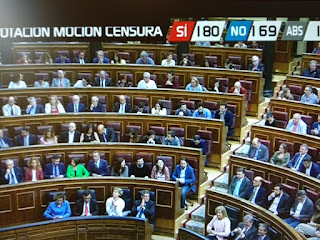 ‼️
The no-confidence motion has been approved by 180 votes, absolute majority.
Rajoy‘s resignation has immediate effect and Pedro Sánchez is from now on the President of the Spanish Government
Today democracy wins and the corruption loses. Congratulations all