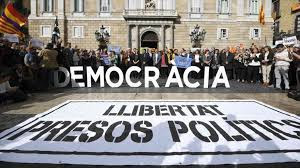 We can confirm that we are in possession of a European arrest warrant for Clara Ponsati. We have made a number of enquiries to try to trace her and have now been contacted by her solicitor, who is making arrangements for Ms Ponsati to hand herself into police.
— Police Scotland (@policescotland) 25 de marzo de 2018

2/ Under Extradition Act 2003, Scottish Ministers have no power to intervene in the process and our police and courts are legally obliged to follow due process. This does not change @scotgov political view...
— Nicola Sturgeon (@NicolaSturgeon) 25 de marzo de 2018

The news of arrest warrants and arrest of many Catalan politicians is a cause for considerable concern. Catalonia’s constitutional future should be a matter of negotiation and by the votes of people who live in Catalonia. Madrid needs to talk and not act as the playground bully.
— Ian Blackford (@IanBlackfordMP) 25 de marzo de 2018

Perhaps the most important section of the 2003 Act, from Ponsati's perspective, is section 13, which reads as follows: pic.twitter.com/FmrOcm6hNA
— PeatWorrier (@PeatWorrier) 25 de marzo de 2018

I am instructed 2defend Clara Posanti from Spain’s attempts 2extradite her on the basis that this is viewed as a political persecution & there is no guarantee of her human rights being respected in the Spanish Courts  #Catalonia https://t.co/H6iCPkcqfZ
— Aamer Anwar (@AamerAnwar) 25 de marzo de 2018

Whatever your views on the independence issue I can’t see how this helps bring a resolution to the political dispute in Catalonia. https://t.co/LebVqrZ0Jx
— Willie Rennie (@willie_rennie) 25 de marzo de 2018

Hard to believe that a Professor at Scotland's oldest university is facing arrest for political activity, when we thought European political prisoners were an injustice of history books. Spain's actions are an attack on democratic & human rights - including academic freedom.
— Michael Gray (@GrayInGlasgow) 25 de marzo de 2018

- The people who are in prison, do you think they are #politicalPrisoners?