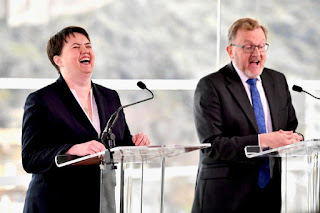 (This article was firts published in Bella Caledonia)

It was 2011 when the SNP won the election. Alex Salmond became the First Minister of Scotland and he committed to an independence referendum.

In Spain, where a party manifesto can be ignored after any election, the idea of Salmond doing what he had promised was not only a surprise but a novelty.

In 2012, when it became crystal clear that Scotland was to decide its future in an exemplary campaign, many Spanish politicians, especially from the Popular Party, started to act like they always do: interfering in external affairs.

The Catalan case was also growing and some thought that it would be a very bad idea to allow a referendum of independence in Scotland. So, I remember well the first article in El Confidencial suggesting that there had been talks between civil servants and diplomatic sources about trying to stop that referendum and the sharing of their concerns with the UK Government.

Very soon the game of whether a Spanish veto would be likely or unlikely was adopted by the British Media and it got worse when the referendum was about to take place. We all remember that malicious intervention by Mr. Barroso on the Marr Show or the so badly translated interview of Mr. Rajoy in El País, playing with words without clarifying whether Spain would veto Scotland´s EU membership or not. It was all nonsense but it served to convince enough people to stop Scotland winning its independent status.

I don´t remember though any mention of the BBC or the MSM asking questions or getting clear official answers about this issue. I don´t remember any British journalist speaking directly with the Spanish Minister and asking him what the official position was.

If those journalists had done their job and had watched the sessions in the Spanish Congress, they could have clarified what the real answer was. But instead they played the card of confusion because they knew the issue of EU membership was an essential one. 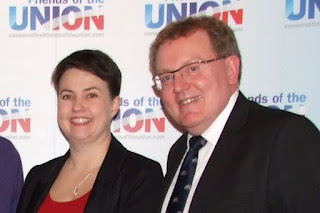 Mr. González Pons has been the famous face of the Spanish Veto Myth. Ruth Davidson was never asked about her secret meetings with the Popular Party and their joint international campaign against independence.

Now we see the polemic of the Spanish Consul. He didn´t say anything offensive or false. He was doing what a representative of the Spanish State must do: clarify the official position already shared by not one but three different Foreign Ministers (Mr. Margallo, Mr. Dastis and the latest, Mr. Borrell).

The Spanish Consul, Mr. Vecino said to the Spanish newspaper El Mundo:
“Contrary to what has been reported I have never made any political management without the knowledge of the Minister and the Embassy whom I have kept punctually informed and in detail such that there has never been the least reproach or criticism from either of them”
And he continued: “On the contrary, collaboration on political issues has always been excellent with both, as proven by the numerous e-mails exchanged”

When the reaction to something written by the Spanish Consul is followed by an article about the problems of the Consulate and his destitution, something clearly stinks.

We didn´t have to wait very long to know what had happened.

The Spanish newspaper Vox Populi explained that it was a phone call and a complaint from the Foreign Office that had caused the immediate cessation of the Consul.

The Herald, once again, published this non-news not for the importance of what González Pons was saying but to damage the now super strong case of the Scottish Government in Europe. What poor journalism and toxic propaganda against the interests of the people of Scotland. Shame on them!

The only politician who has shown seriousness and respect and has been coherent is the First Minister of Scotland. She is very well considered all over the World and I have no doubt she will be seen as a true leader in further negotiations with the EU.

Could Spain try to veto Scotland? No way! In a no-deal Brexit scenario Scotland will be very welcome in the EU. And remember, Brussels will be able to openly support an independent Scotland once the UK is out of the EU.

I´ve said this several times but Spain really owes the people of Scotland a sincere and formal apology. The damage caused by the Popular Party members is obvious and well known. They don´t understand democracy, they don´t respect the rules.

González Pons and others have been changing their position (sometimes yes, sometimes no) and their statements depending on their own party interests and they have had the support of many journalists incapable of doing their job of checking the information. It looks like they are acting as a platform for certain organizations. We have seen something very similar with Ruth Davidson in Scotland.

If they think they can “Catalanize” the Scottish case, they should think again.
First of all because the Spanish conservative politicians have achieved the highest levels of corruption and deterioration and they have been trying to hide this by creating an enormous problem with the Catalan process.

Secondly, we all know Spain has a written Constitution that has made it impossible to present any alternatives as realistic. It was the overall majority government of the Popular Party that didn´t respect either the Catalan Statute or the Spanish Constitution and all their strategy has caused their electoral debacle and the improvement of the pro-independence Catalan parties. We have a saying in Galicia: “Se non queres caldo, sete tazas” (“If you don´t want broth, well then - seven bowls full”)

And finally, we are now waiting for the sentence of the Supreme Court for the Catalan leaders, the political prisoners. The shadow of no confidence in the Spanish judiciary is very long. I can´t see Scots Law and the Judges in Scotland playing that card; that would be, indeed, the end of the Union.

Meanwhile as I’m writing this article, I see Boris Johnson could become the new Tory Prime Minister making the no-deal Brexit scenario more likely. Dear Scotland, run, run as fast as you can. Your friends in Europe will be supporting you as always. Go for it and start a new chapter of your admirable history. Grasp the thistle, Scotland. Now is the time!

Our @pilaraymara on the Myths of the Spanish Veto https://t.co/OohbuWjkax
— Bella Caledonia (@bellacaledonia) 15 de junio de 2019