WHAT'S HAPPENING IN SCOTLAND: DUGGY DUG AND OTHER INITIATIVES (TRANSLATION)

And here you have the translation of my article in "Sermos Galiza". I hope you enjoy it. 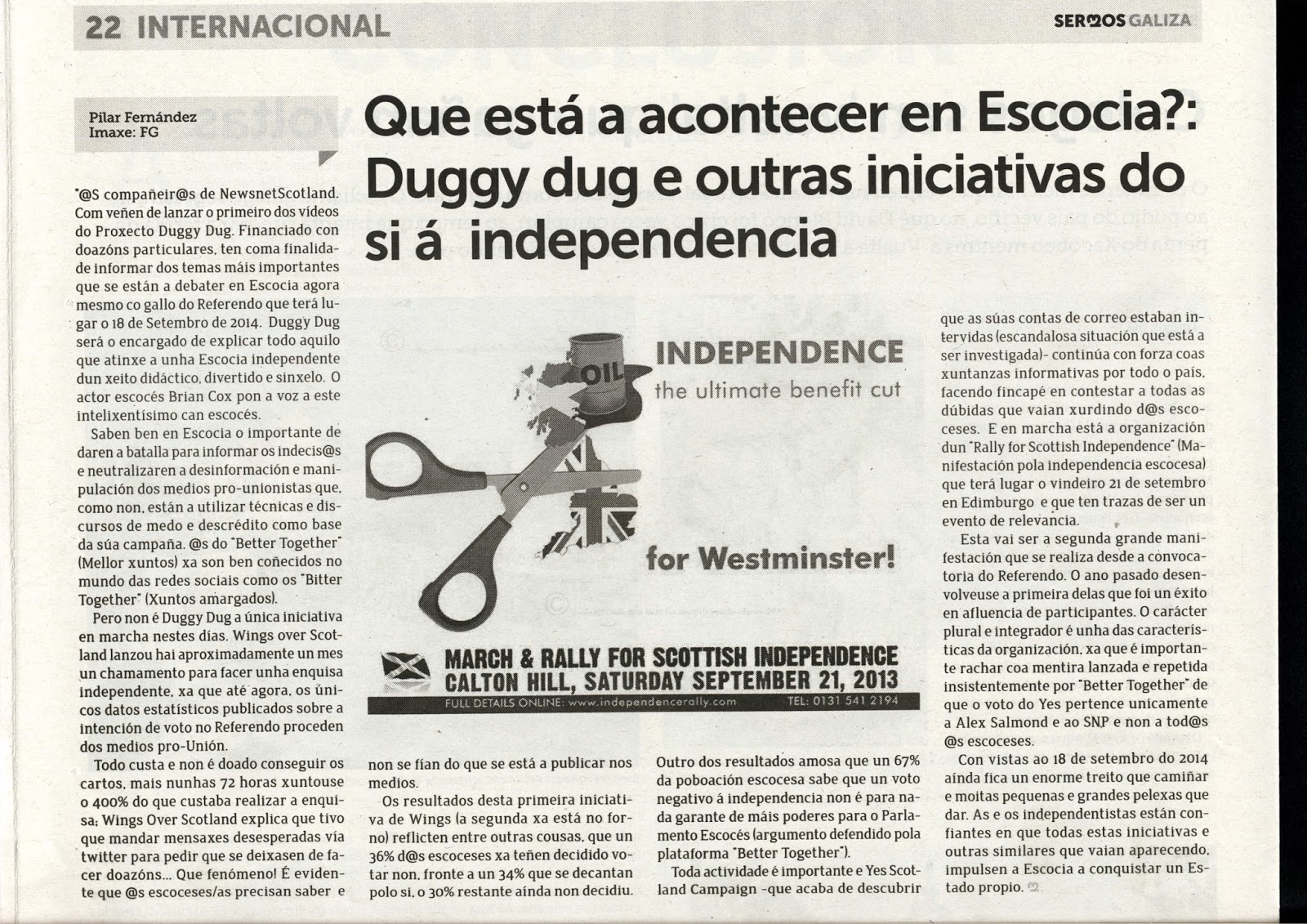 WHAT IS HAPPENING IN SCOTLAND? DUGGY DUG AND OTHER INITIATIVES FOR THE YES TO INDEPENDENCE


NewsnetScotland colleagues have launched the first video of Duggy Dug Project. Financed by private donations, it's objective is to report on the most important themes of debate in Scotland now with the occasion of the referendum to be held on 18 September 2014. Duggy Dug, will be responsible for explaining everything that relates to an independent Scotland in an educational, fun and simple way. The Scottish actor Brian Cox puts his voice to this very clever Scottish dog.


They all know very well in Scotland how important the battle will be to inform the undecided and neutralize the disinformation and manipulation from the pro-unionist media who, of course, are using techniques and discourses of fear and disrepute as the basis for its campaign. “Better Together" are already well known in the world of social networks as “Bitter Together".

But Duggy Dug it’s not the only initiative launched these days, Wings Over Scotland launched about a month ago an appeal for an independent poll, because so far, the only published statistics on the intention to vote in the referendum proceeds from the pro-Union media.


All its costs, and it's not easy to get money, but in less than 72 hours, 400 % of the cost to perform the survey were raised, Wings Over Scotland explained that he had to send desperate messages via twitter to ask people not to make more donations ... What a phenomenon! Clearly the Scottish people need to know and they don't believe in media reports.

The results of this first initiative of Wings (the second is already in the oven) reflects among other things, that 36% of Scots have already decided to vote NO, compared to 34 % who opt for YES, the remaining 30% have still not decided. Another of the results showed that 67% of the Scottish population knows that a negative vote to independence means no more devolution powers to the Scottish Parliament (an argument defended by the platform " Better Together").

All activity is important and YES Scotland who has just discovered that its email accounts were hacked (this outrageous situation is being investigated), keeps working very hard with informative meetings across the country, focusing on answering all the questions that arise from the Scots. And also, a Rally for Scottish Independence has been organised that will take place next 21st of September in Edinburgh and it seems that it's going to be an event of significance.

This will be the second major event to take place since the announcement of the referendum; last year was the first one that had a successful influx of participants. A plural and inclusive nature is one of the characteristics of the organization , as it is important to break the lie launched and repeated insistently by " Better Together" that the Yes vote belongs only to Alex Salmond and the SNP and not to all the Scots.

With a view to 18th September 2014, there is still a huge stretch to walk and many small and big battles to fight. The independence supporters are sure that these sorts of initiatives and others to come will push Scotland on to gain its own State.