Theresa May is poised to become Prime Minister-elect of the United Kingdom and to see her leadership reinforced after calling for an early election which she had repeated on several occasions, would not take place until 2020.

But surveys were and still are favourable and she wanted to take advantage of the ongoing crisis of the Labour Party, and to try to achieve a mandate that enables her to carry out negotiations of Brexit more comfortably.

On the other hand, she also wanted to test the nationalism in Scotland, her greatest enemy, and to try to delegitimize the official request by the Scottish Parliament for a new independence referendum before Brexit is effective.

Theresa May urged Scots to send a clear message against the Scottish National Party (SNP) in the local elections on 4th May. The manifestos of the unionist parties, especially the Conservatives and Labour, didn´t implement proposals on local issues but instead launched in unison a single message: "No to a second independence referendum".

The result could not have been clearer. Forty-six percent of the electorate exercised their right to vote, and 70 percent of them opted for candidates of more progressive parties than the Tories. The Scottish National Party (SNP) and the Scottish Green increased their number of councillors with respect to what they had in 2012.

The Conservatives achieved a very good result both in the rest of the UK, where they got the votes of UKIP which almost disappeared; and also in Scotland, where they clearly gained from the remains of the wreck that is Scottish Labour.

But the unionist propaganda machine which has been working non-stop for many months, is determined to hide any success or achievement of the Scottish Government on the state channels while providing ample time for the intervention of more extreme voices which are favourable to the Tories.

The often alleged bias of the BBC, which has not decreased, reported these days less SNP councillors, comparing the results to seats in 2007 and not with the previous election in 2012.

Right now, the SNP is the biggest party in municipalities such as Glasgow, a traditional Labour stronghold for 40 years. This is a huge accomplishment for the party led by Nicola Sturgeon, which was also the most voted party in the vast majority of the regions of Scotland.

However, the guidelines are clear from London: the SNP must be halted at all costs to inflict a major defeat in the general elections of June 8th.

In the previous general elections of 2015, the SNP won 56 of 59 seats. Some surveys predict that the Tories now with the help of tactical unionist voting could get some more seats than just the Secretary of State for Scotland, David Mundell. 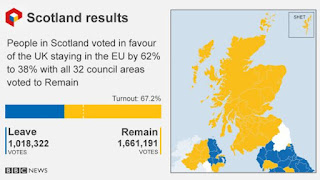 The SNP is already campaigning in the streets and with the Greens, colleagues in the battle against Brexit and in favour of a second independence referendum, they are already working on an implicit progressive alliance. In fact, the Scottish Green Party has presented only three candidates for Westminster, and is calling for a common front against the devastating policies of the Tories.

Theresa May has received constant criticism for not wanting to participate in the televised election debates, and the BBC has done everything possible to avoid a confrontation in public between her and the Scottish First Minister.

For May this election is supposed to achieve the power to carry out all the projects of a hard Brexit, their xenophobic and reactionary policies and the reconciliation of the Conservative Party with the UKIP extremists now returning to the common house of the Tories. We talk about Le Pen, but there are few differences in the arguments, programs and behaviour of the British Conservatives.

For Nicola Sturgeon it is to strengthen her legitimate and democratic mandate to defend Scotland against the constant attacks from London and, more than ever, to stop the advance of the Conservative forces that Labour with its complicity has allowed to grow.

And for Scotland these elections will be another litmus test. An important decision between the defence of their institutions and the centralism of Theresa May that will clearly endanger the existence of the Holyrood Parliament and the sovereignty of the Scottish people.
Publicado por pilaraymara.com en 11:53