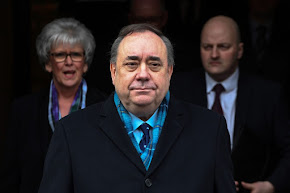 A spokesperson for Mr Salmond said: “Mr Salmond has never refused to give evidence and remains happy to do so. On Monday, he had confirmed attendance at the Parliamentary Committee today to deliver his evidence. His submissions had been approved and were published that day. Logistical and health and safety arrangements had been made for the evidence session and travel plans had been organised.

On Monday afternoon the First Minister pre-emptively announced that there was no evidence of wrongdoing on her government’s part. This was before Mr Salmond’s evidence was even published

Then late on Monday night, after publication on the Parliamentary website the Crown Office intervened, which led to redaction of substantial sections of some of the very evidence the First Minister claimed did not exist.

In light of this astonishing decision to intervene at the eleventh hour and in light of the timing, Mr Salmond asked the Committee to defer his evidence by 48 hours to enable his legal team to consider the full implications of this extraordinary intervention.

Mr Salmond has now asked his lawyers, Levy & McRae, to write to the Lord Advocate as the Head of the Crown Office to ask for an explanation for the Crown’s unprecedented and highly irregular actions. In particular the Lord Advocate has now been asked to explain;

1. What was the legal basis for the Crown’s intervention, when lawyers and counsel have approved the submission as being fully compliant with Lady Dorrian’s judgment? Their advice is that they can see no legal reason for this move.

2. Why did the Crown not complain until now about the paragraphs they have asked to be removed from Mr Salmond’s submission, given that they have known about these since before 15th January and they have been in the public domain since then too? The Parliament also approved the submission before publishing it on the Inquiry website.

• Why has the Crown’s position changed? What new information or intervention led to such a dramatic expansion of the material which the Parliament has been required to redact?

• Specifically, given the fact that each of the paragraphs which appeared in the original submission on the Ministerial Code in the same terms as previously accepted, what about those paragraphs is suddenly now so legally “problematic” that a Parliamentary Inquiry is to be deprived of that evidence? If the evidence is not published, the stated position of the Committee is that it will not be considered.

• What has now altered the legal analysis of this same text which means that members of the public following the evidence before the Committee on a matter of this importance are now not to have access to it via publication by the Parliament?

• What representations were made to Crown Office on this question, by whom, when and on what basis?

• If the submission remained a concern, why were no representations made about the balance of the submission before yesterday? Specifically, why was no aspect of this raised at the recent Hearing before Lady Dorrian?

Mr Salmond has instructed his lawyers to request specifically that the Crown preserve and retain all material and communications with all or any third parties which led to their decision to intervene at the very last minute just as he was set to give his evidence.”