Interview with IVAN McKEE (Business for Scotland) published by #SermosGaliza 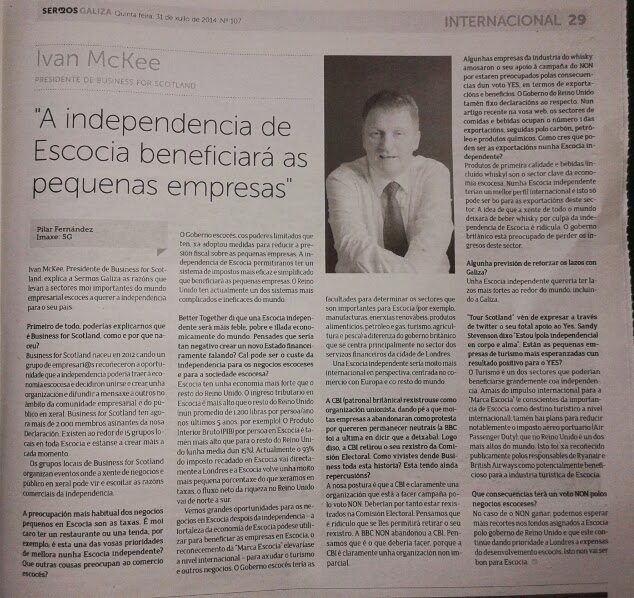 Here you have the original version:
Inteview by Pilar Fernández for Sermos Galiza

First of all, could you tell us, what is Business for Scotland and how was it born?

Ivan McKee:  Business for Scotland was created in 2012 when a group of business people who recognised the business opportunities that Independence would bring to the Scottish economy decided to get together and create an organisation to spread this message to others in the Scottish business community and to the general public. Business for Scotland now has more than 2000 members who have signed up to its Declaration. There are around 15 local groups now throughout Scotland and more are being created all the time.
Local BfS groups organise events where business people and members of the general public can come along to hear the business case for Independence.

One of the concerns of small businesses in Scotland is taxes. It is very expensive to have a restaurant, for example, or a shop… Is this situation one of the priorities to improve in an independent Scotland? What other concerns do Scottish businesses have at this moment?
The Scottish Government with the limited powers it has at the moment has taken steps to reduce the tax burden on small business (for example Property taxes). Independence for Scotland will allow us to have a more effective and simplified Tax system which will benefit small businesses. The UK currently has one of the most complicated and inefficient tax systems in the world.

We see great opportunities for business in Scotland after Independence – the strength of Scotland’s economy can be used to benefit business in Scotland, the recognition of Brand Scotland will be raised internationally – helping tourism and other businesses. The Scottish Government will have the powers to focus on sectors which are important to Scotland (for example Manufacturing, Renewable Energy, Food and Drink, Oil and Gas, Tourism, Agriculture and Fisheries) unlike the UK government which is mainly focussed on the Financial Services sector in the City of London.
An Independent Scotland would be more international in its outlook, focused on trading across Europe and around the world.

The CBI was officially registered as a No supporting organization; many enterprises resigned from the CBI as a protest because they wanted to remain neutral (the last one being the BBC). After that, the CBI removed its registration from the Electoral Commission. How did Business for Scotland, view all this movement? Have there been any repercussion?

Our view is that the CBI is clearly an organisation which is campaigning for a NO vote. They should therefore be registered with the Electoral Commission. We think it is ridiculous that they have been allowed to remove their registration. The BBC has NOT resigned from the CBI. We think they should as the CBI is clearly not an impartial organisation.

Some whisky manufacturers have showed their support for the No Campaign as they were concerned about the consequences of a Yes vote in terms of exports and benefits. The UK Gov. has made some statements on this matter too.
In a recent article on your website, food and drink were the top of exports, following by coke (coal?), petroleum and chemicals. How do you think the international exports will be effected by

Premium Food and Drink (including Whisky) is a key sector for the Scottish economy. An independent Scotland would have a higher international profile and this can only be good for exports from this sector. The idea that people around the world will stop drinking Whisky because of independence for Scotland is ridiculous. The UK government is worried about losing the revenue from this sector.

Is there any chance of making stronger links with Galicia?

An Independent Scotland would want to have stronger links across the world, including with Galicia.

I saw a tweet from Tour Scotland showing support for a YES, Sandy Stevenson said “I’m with (Independence) with all my heart and soul”. Are small tourism enterprises more hopeful with a YES result?

Tourism is one sector that could benefit greatly from Independence. Apart for the international boost to Brand Scotland (raising awareness of Scotland as a tourist destination internationally), there are also plans to significantly reduce the tax charged on flights (Air Passenger Duty) which in in the UK is one of the highest in the world. This has been publically recognised by the heads of RyanAir and British Airways as being of potentially very great benefit to the Scottish tourism industry.

What will the consequences of a NO vote have on Scottish Business?

In the event of a NO vote we can expect to see further cuts to the money allocated to Scotland by the UK government and for the UK government to continue to prioritise London at the expense of developing Scotland. This will not be good for business in Scotland.