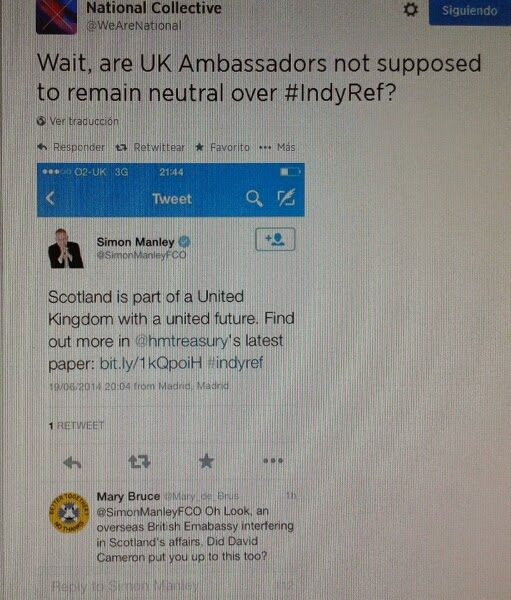 I was shocked to see that you had Tweeted, at 21:04 yesterday, 19th June, a statement that "Scotland is part of a United Kingdom with a united future."
Are you not meant to represent the views of all your British citizens in Spain? Surely you, as an independent civil servant, should avoid the bias of simply representing one side of the argument. You must be aware (or you have been very poorly briefed) that the Government papers you cite have been shown to be innacurate and biassed.
I am one of the many British citizens living here who believe that Scotland, and England, will benefit from Scottish independence. Would you please bear this in mind in future communications, and ensure that this important national debate gets a fair airing?
I have written to you about this. A copy will be attached to my short subsequent email.
Christopher Carnie
From Catalonia


Christopher has also sent an email to the MP Angus Robertson urging him to ask a Parlamentary question at Westminster:

Dear Mr Robertson
As SNP Shadow Spokesperson on Foreign Affairs, you will be aware of the activities of UK Embassies abroad in promoting the "Better Together" political line.
The UK Ambassador to Spain, Simon Manley, Tweeted yesterday, 19th June at 21:04 the following message on his account @SimonManleyFCO:  "Scotland is part of a United Kingdom with a united future. Find out more in @hmtreasury's latest paper: http://bit.ly/1kQpoiH  #indyref"
A friend here in Spain, Pilar Aymara Fernandez, is coordinating a campaign to write to the Embassies about their biassed projection of the argument.
I have written to the Ambassador.
Would you consider tabling a Parliamentary Question to the FCO on the issue? For example:
To ask the Secretary of State for Foreign and Commonwealth Affairs if he has briefed UK Ambassadors to represent the debate on the Scottish Referendum fairly; and if he has briefed, instructed or otherwise required Her Majesty's Ambassadors to represent one side of the Referendum debate, to lay before Parliament these briefings; and if the actions of Her Majesty's Ambassador to Spain in tweeting, on 19th June 2014 at 21:04, a personal opinion on the Referendum were duly authorised by his Department.
In a separate email, I will attach copies of the Ambassador's tweet, and my letter to him.
Many thanks, Mr Robertson, for your help in this matter.
All the best

Christopher Carnie
And here you can read Christopher's letter to the British Embassy in Madrid (Solidarity with Scotland International Campaign). Thank you very much Christopher for all your support! 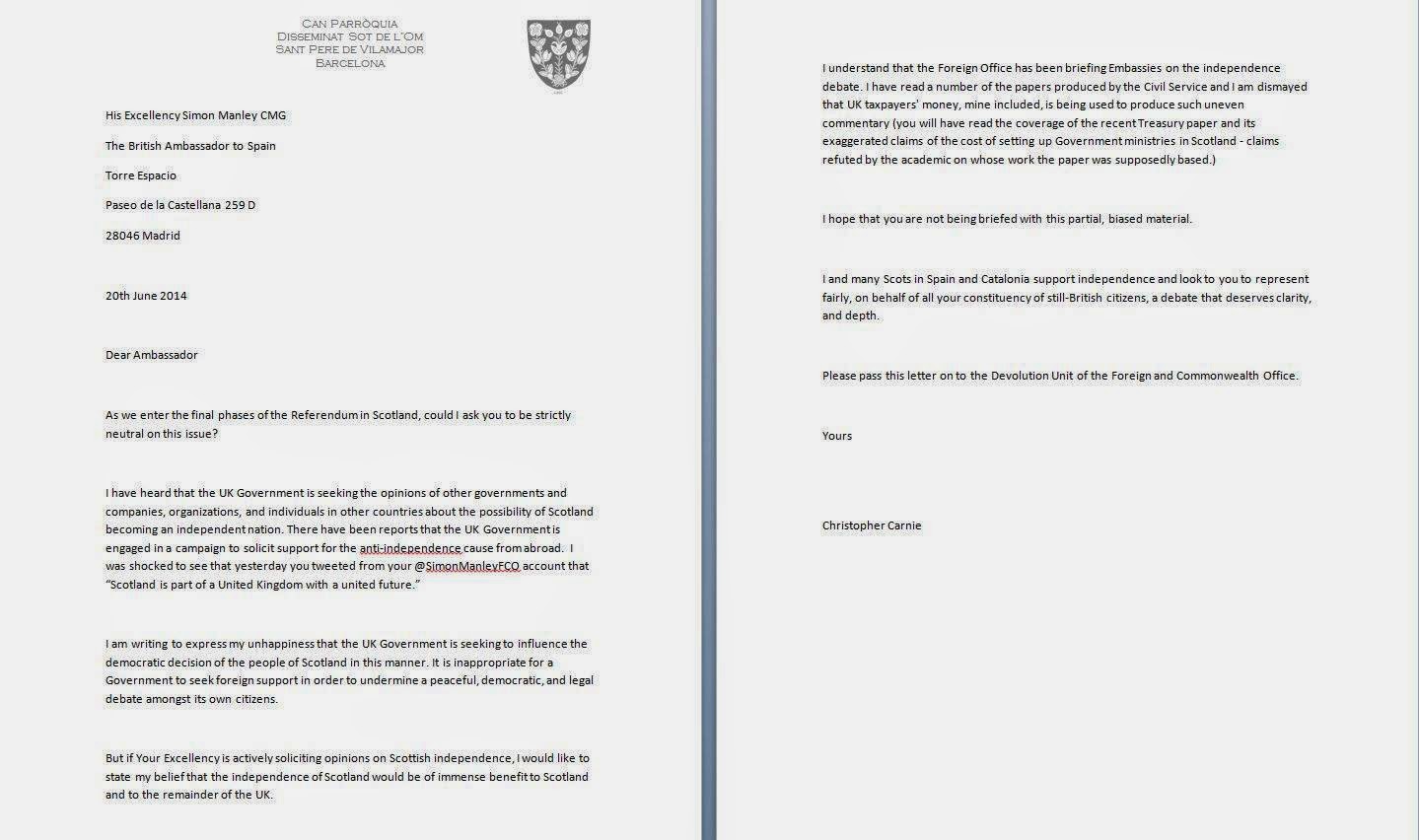